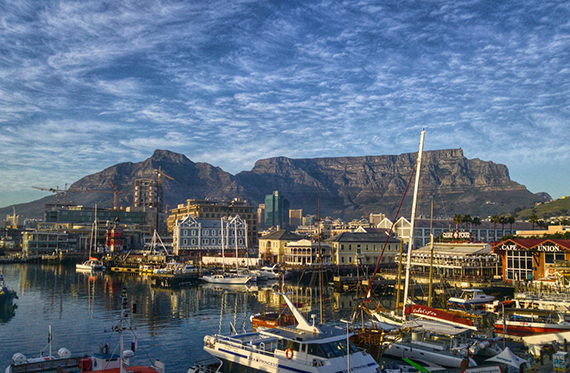 Situated at the southern tip of Africa, South Africa is 1 233 404km² in size and is edged on three sides by nearly 3 000km of coastline, with the Indian Ocean to the east and the Atlantic Ocean to the west. The country is bordered in the north by Namibia, Botswana, Zimbabwe, and Mozambique, and also encloses two independent countries, the kingdoms of Lesotho and Swaziland. Every country in the world displays some diversity, but South Africa, stretching from the hippos in the Limpopo River to the penguins waddling on the Cape, takes some beating. It befits its position at the southern end of the world’s most epic continent, with more types of terrain than photographers can shake their zoom lens at. There’s the deserted Kalahari, Namakwa’s springtime symphony of wildflowers, iconic Table Mountain and Cape Point, Kruger National Park’s wildlife-stalked savannah (scene of the famous lion- buffalo-crocodile battle watched more than 40 million times on YouTube) and, running through the east of the country and into Lesotho, the Drakensberg. KwaZulu-Natal’s iSimangaliso Wetland Park alone has five distinct ecosystems, attracting both zebras and dolphins. South Africans are among the most welcoming people and the country& emergence from its turbulent past provides a dramatic history and the promise of something new every time you visit.